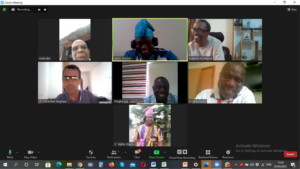 The Ecological Organic Agriculture Initiative’ (EOA-I) Regional Secretariat of West Africa under the able leadership of Mr Ernest Aubee of the Economic Community of West Africa States (ECOWAS) Commission as a follow-up to the Thursday September 24, 2020 virtual meeting had a collaborative and interactive virtual meeting via Zoom with the Food and Agriculture Organisation of the United Nations (FAO) Africa and West African sub-region team. The meeting was aimed at reviewing the earlier meeting’ discussions between the FAO and the ECOWAS-led ecological agriculture projects, with a view of finding strong way forward to improving collaboration between the two teams on Friday, 7th May, 2021.

The Chairman, Regional Steering Committee (RSC) of Ecological Organic Agriculture (EOA) Initiative in West African, Mr Ernest Aubee thanked the participants for gracing the occasion. He believes the two parties are doing well in the domain of agriculture especially in agroecology sector and urged the participants at the virtual meeting to work closely for better collaboration in the West African region.

While welcoming the participants at the meeting, Dr Eugene Rurangwa on behalf of Robert Grey commended the efforts of all the participants. The Team appreciates the leadership of the ECOWAS Commission. He assured the FAO West African collaboration is keen to work with the EOA-I team. He introduced Mr Rene Sébastien who now replaces Dr Benoit Gnonlonfon. Mr Sebastien Regnaut thanked everyone and believes that the EOA Team can count on his collaborative efforts.

The Chairman of the Ecological Organic Agriculture Initiative’ (EOA-I), Mr Ernest Aubee of the Economic Community of West Africa States (ECOWAS) Commission thanks the participants for attending the meeting. Activities common to both parties were highlighted and possible areas of collaboration were also addressed. Seven participants took part in the virtual meeting. The meeting ended at 12:40 GMT.

TOWARDS A SUCCESSFUL ORGANISATION OF THE 6TH WEST AFRICAN ORGANIC CONFERENCE...
Scroll to top