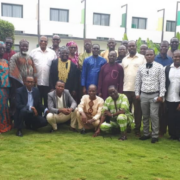 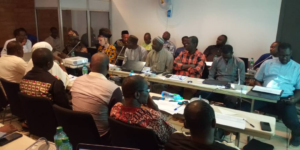 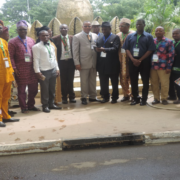 The 2nd Regional Steering Committee (RSC)  meeting of  West African Ecological Organic Agriculture Initiative’ under the chairmanship of Mr. Ernest Aubee of the ECOWAS-Commission took place at Ibis hotels, Ikeja Lagos, Nigeria on April 26 & 27, 2019. The Chairman welcomed everybody to the 2nd Regional Steering Committee (RSC) meeting. He thanked the members and the staff of the Regional Secretariat for being dutiful. He remarked that a lot has been done on EOA at the regional and country levels. According to him, EOA is gaining prominence in West Africa. The Economic Community of West African States (ECOWAS) Commission sent her goodwill messages and encouraged the RSC members to do more in flagging high the banner of EOA. The Chairman added that members will review the rolled-over and 2018 activities of the regional and propose activities for the year 2019.

At the end of the two-day meeting, many fruitful deliberations and strong decisions vis-à-vis Ecological Organic Agriculture activities in the region were made. The RSC members reviewed the rolled-over 2018/2019 work plan and reports. The meeting also proposed some activities for the year 2019. 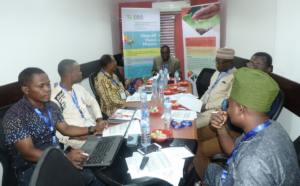 In his closing remarks, the Chairman of the Regional Steering Committee, Mr Ernest Aubee of the ECOWAS-Commission thanked the members for finding time in their very tight schedule to attend the meeting and deliberate on Ecological Organic Agriculture Initiative in West Africa. He also thanked the Secretariat for working hard to put things together and implement the Abuja meeting recommendations.

Executing Agency of Ecological Organic Agriculture Initiative in Africa, Biovision Africa Trust (BvAT), organised a five-day workshop on the Ecological Organic Agriculture Initiative (EOA-I) in West Africa after a similar programme in Machakos, Kenya in East Africa which had in attendance stakeholders from; Ethiopia, Kenya, Uganda, Rwanda and Tanzania). The workshop takes place between 13th and 17th of August 2018 at Riviera Hotel, Cotonou, Republic of Benin. This exercise brought together 40 participants from Nigeria, Mali, Senegal and Benin.

Welcoming the gathering to the workshop, Professor Simplice Davo Vodouhe, from the University of Abomey-Calavi (UAC), Cotonou, thanked the participants for gracing the occasion and hoped the opportunity would provide a fruitful and engaging session. That this will afford them the platform to share experiences and learn from each other. Mr Aimé Bokonon-Ganta, the Chair of the Benin EOA National Steering Committee welcomed the participants to Benin and to the workshop and looked forward to having successful deliberations. In his opening remarks, Dr David Amudavi, the Executive Director of Biovision Africa Trust was glad to have a good number of participants from implementing West African countries (Mali, Senegal, Nigeria and Benin) of the Initiative. He highlighted the importance of the workshop, as an opportunity for the stakeholders to validate two major findings of Phase 1; the Organizational and partner Capacity Assessment report and the External Evaluation Report.

During this planning workshop, the stakeholders shared their success stories, achievements, weaknesses and way-forward of EOA-I’ 1st phase. Afterwards, the participants at the programme considered strategic areas that could be addressed to help achieve the Initiative’ aims and objectives.

Furthermore, the gathering considered two (2) general salient points considered critical to the success of the Initiative in the region:  robust monitoring and evaluation (M&E) framework and Effective grant Management.

The 5-day workshop enabled the stakeholders to provide vital information which would serve as basis inputs for planning for the preparation of the grand proposal for support by the Swiss Government through its agency, the Swiss Development Cooperation, in the next phase of four years.

In his closing remarks, the Beninese minister of Agriculture ably represented by Mr Kwakanou Bonaventure, the permanent secretary of the ministry, lauded the Initiative and reaffirmed the support of the government to organic agriculture. Pointing at the fact that agriculture is the bedrock for sustainable development, Mr Bonaventure stated that the emergence of Ecological Organic Agriculture Initiative paves ways for a sound food security system in the region in particular and in Africa in general. Thereafter bidding the participants safe journey back to their various destinations.

The picture above: the rep of the minister receiving promotional materials from the leader of the ECOWAS led delegate.

The delegate was received by Engr. M. O. Owolabi (one of the Directors at the Federal Ministry of Agriculture and Rural Development) on behalf of the minister, who unavoidably couldn’t attend the meeting. Among other discussions, the ECOWAS led delegate raised the awareness of Ecological Organic Agriculture in Nigeria and West Africa, laying emphasis on its benefits of food security and healthy food production for healthy living. The delegate requested the Minister of Agriculture to be one of the Organic Agriculture Champions in West Africa and also used the opportunity to announce the forthcoming National Organic Agriculture Business Summit (NAOBS) on July 10 – 13 at Lagos Airport Hotel, Ikeja. The ministry also used the opportunity to present some issues on organic inputs (herbicide, pesticide and fungicide) and adequate research confronting development of organic agriculture in Nigeria. According to the representative of the minister, the forthcoming National Organic Agriculture Business Summit should address these challenges.

The Ecological Organic Agriculture (EOA) Initiative in West Africa meeting took place between 3rd and 4th May 2018 at the Economic Community of West Africa States (ECOWAS) Commission headquarters, Abuja, Nigeria to inaugurate its Steering Committee. The meeting was chaired by Mr Sékou Sangaré, the ECOWAS Commissioner for Agriculture, Environment and Water Resources ably represented by Mr Ernest Aubee the Chairman of the Regional Steering Committee of EOA-I in West Africa. The meeting had in attendance fourteen (14) participants from Benin, Mali, Senegal and Nigeria. Different issues relating to EOA-I activities in the region and in Africa were discussed.

Mr Ernest Aubee on behalf of the ECOWAS Commissioner for Agriculture, Environment and Water Resources welcomed everyone present and discussed about the need for a vibrant Ecological Organic Agriculture which will enhance food security for feeding more than three hundred and fifty million people of the region and to tackle environmental challenges, which are causing a lot of issues. He informed the meeting that the ECOWAS Commission just lunched a project on agro-ecological agriculture in West Africa funded by French Government to the tune of eight millions Euros. He noted that the project is designed to promote agro-ecological practices in West African region. “This project is designed to promote agro-ecological agriculture in the region by implementing it in five pilot countries; Burkina Faso, Cote d’Ivoire, Togo, Ghana and Mali in the bid to spread it to the entire ECOWAS region.  Mr Ernest Aubee added that the project will work on capacity building, technologies and raise awareness. He believes it will support other similar projects in West Africa. The ECOWAS Commission will also work closely with regional and continental clusters in ensuring that EOA becomes widespread. He also encouraged the member states to ensure that Organic Agriculture is implemented in their countries as a matter of priority. He ended his message by wishing the Regional Steering Committee fruitful deliberations.

At the end of the two-day meeting, some salient issues were addressed and fruitful resolutions were made. The Regional Steering Committee of eight (8) members was set up and formalized, they are; Mr Ernest Aubee, the Chairman, Prof Simplice D. Vodouhe, the Vice-Chairman, Dr. Olugbenga O. AdeOluwa, the Secretary while Mr. Ernest Pedro Comlan, Mr Seydou Tangara, Sir Mike Elechi, Dr. Emile V. Coly and Dr. Abdulai Jalloh as  members. The Ecological Organic Agriculture Initiative in West Africa considered activities in the four (4) implementing countries through their CLOs. An overview of EOA activities in West Africa and Africa was also presented. The Committee paid an advocacy/courtesy visit to the Hon. Ministry of Agriculture and Rural Development. The Chairman presented ECOWAS perspective on how to expand EOA-I. The Committee considered the 2018 work-plan and the roll-over activities of 2014-2016 and 2017.