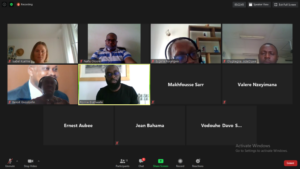 The Ecological Organic Agriculture Initiative’ (EOA-I) Regional Secretariat of West Africa under the able leadership of Mr Ernest Aubee of the Economic Community of West Africa States (ECOWAS) Commission had a collaborative and interactive virtual meeting via Zoom with the Food and Agriculture Organisation of the United Nations (FAO) Africa and West African sub-region team on Thursday, September 24, 2020.

The meeting which was moderated by Dr Eugene Rurangwa aimed at initiating interaction between the FAO and ECOWAS led ecological agriculture projects, with a view of finding commonalities and way forward to improving collaboration between the two teams. The moderator welcomed the participants at the meeting and wished the meeting fruitful and constructive deliberations. The Chairman of the Regional Steering Committee (RSC) of Ecological Organic Agriculture (EOA) Initiative in West African, Mr Ernest Aubee thanked the participants for gracing the occasion. He reiterated the readiness of the ECOWAS Commission and other critical stakeholders to support the cause of Agroecology in Africa and especially in West Africa. He also thanked the leadership of the FAO Africa and West African team for the meeting.

Isabel Kuehne presented the various agroecology projects of FAO (globally and in Africa), while her other team members also contributed on other specific projects in other parts of Africa. Dr. Olugbenga O. AdeOluwa made a general presentation on SDC-EOA activities in Benin, Mali, Nigeria and Senegal, as well as the West Africa Secretariat activities.

In total, eleven participants (from Africa and Rome) took part in the virtual meeting. Activities common to both parties were highlighted and possible areas of collaboration were also addressed.